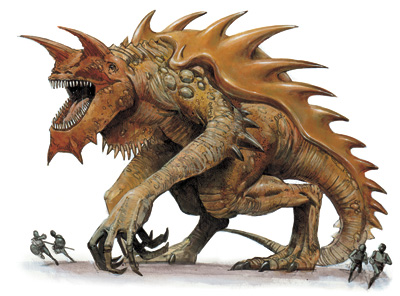 The Tarrasque is a mythical behemoth of epic proportions. Known throughout the world of the mythological as one of the few singular beasts of recorded history the Tarrasque has rampaged over many-a-realm and has now found its way to Phantasia.

The Tarrasque is a singular monster that can NOT be summoned by summoning scrolls, it instead must be found through some detective work of any character who wishes to challenge the beast to combat. The monster does not stray too far from civilization, and it is rumored that even the hardy merchants flee when this monster is near.

The Tarrasque is an incredibly hardy beast, known to shrug blows from even the sharpest of weapons, resist the efforts of the most powerful of magicians, and even overpower those modes of death that would seem to be impossible to evade. Born of the magic of the greatest wizards and gods alike the Tarrasque cannot truly be slain, only disabled for some time until it heals. It is rumored that the Tarrasque can only truly be slain by rendering it unconscious, and then using a wishing spell to wish it to actually die. Seeing as there are no wishing spells within the Phantasia realm, the Tarrasque is going to be active for quite some time.